Shakyamuni is represented here in the full lotus position sitting on a two-tiered stand, right hand in the abhaya (fearlessness) mudra, and left hand resting on his robe. The monk’s robe reveals his right shoulder, and his face has a spiritual, somber expression. The inner section of the body halo behind the Buddha figure has seven Buddha icons, with U-shaped flames adorning the outer section, accentuating the figure and enhancing its grandeur. Despite the modest size of this example, it stylistically resembles the stone Buddha statue in Grotto 20 of the Yungang (雲罔) Grottoes in China, which date to the Northern Wei Kingdom (around 460 AD). This represented a new way of rendering Buddhist images starting in the Taihe period (477–499). The figure and the stand were cast as one piece, the body halo separately. The bronze body is beautifully cast, and the gilding, which carries a hint of red, is generously applied, adhering well to the bronze. All in all, it demonstrates a high level of craftsmanship. The top tier of the stand is a Mt. Sumeru throne decorated with lotuses, and at the side with floral scrolls. Two lions sit at the base, their heads turned back, their posture majestic. The lower tier is a square stand decorated with rolling waves, each side carved with figures making offerings, and floral scrolls. The reverse side of the body halo reveals a complex set of scenes that closer inspection shows to have a definite design that can be divided into three sections. Shakyamuni sits together with Prabhutaratna in a tower that occupies the center of the upper section. To the left and right of the tower, we see Manjusri, holding a “ruyi (如意)” sceptre, and Vimalakirti, holding a duster, engaged in conversation in a scene taken from the “Vimalakirti-nirdesa sutra” in which Manjusri inquires about Vimalakirti’s illness. In the middle section, we see Shakyamuni giving his first sermon in the deer park at Sarnath, with two monks, or biqiu (比丘), to either side in meditation, as well as two bodhisattvas. The lower section relates the story of the Buddha’s birth, with Shakyamuni as a newborn holding one hand up to the Heavens and touching the earth with the other in the center of the scene. On the left, his mother, Queen Maya, is standing next to a tree with the mature Buddha emerging from her right side. On the right of the scene, the Dragon Kings bathes the Buddha as Brahma and Indra sit in meditation to either side. On the far left and right of the lower section are two rectangular sections with inscriptions, but these are no longer legible. Both the content and structure of this scene make it a masterpiece of the 5th century. The reverse side of the stand also has an inscription dated to the tenth day of the ninth lunar month of the first year of the Taihe reign (477). Given the fact that this set is complete, with both the statue and the halo background, and also due to the quality of the workmanship, the richness of the content of the scene on the reverse side, and the fact that the exact date is known, it is of considerable artistic, historical and religious significance, making it one of the most important gilt bronze Buddhist statues in the world. 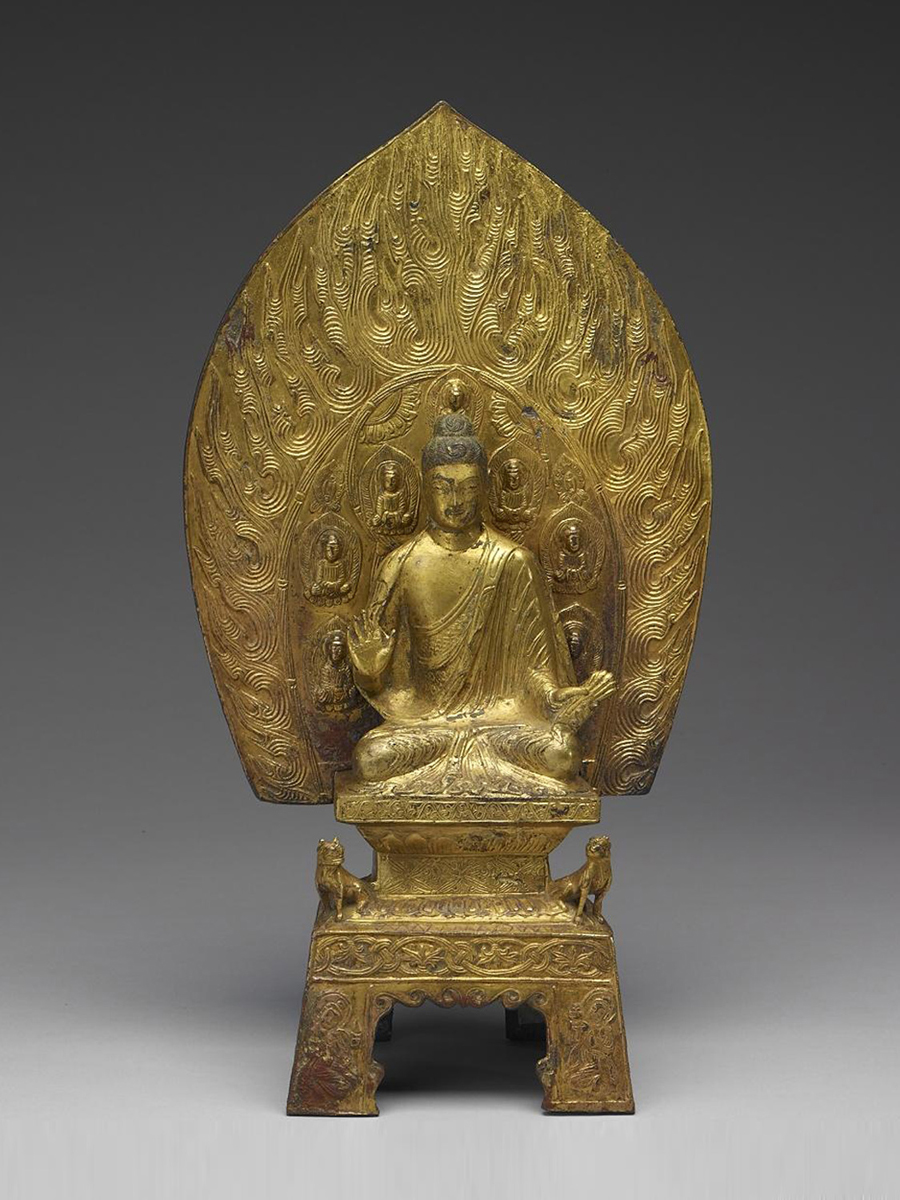