With a small round rim, a fine straight neck, sloping shoulders, a round flat body, an oval base, and a flat base that is slightly concave, this vessel appears with two handles in the shape of ruyi. The neck is painted with a circling design of plantain leaves, above and below which are linear patterns in blue. The shoulder and base are also decorated with inverted lotus petal designs, and the main decoration of the body is a landscape garden scene. On one side are three figures, and on the other two. They hold musical instruments and appear to be dancing. The musicians and their clothes also indicate that they are non-Chinese. The heavy blue-and-white decorations include many spots of brownish-green and dark brown, which appear as depressions in the surface. Blue is also found throughout the white glaze, and the places on the handles where the glaze collected is lake-green in color. The light biscuit of the body is quite delicate, and biscuit-glaze borderline has a glimmer of light orange color. The flat vase is known as an “embracing moon” vase, its shape being an imitation deriving from the Middle East. The decoration here, however, is very much Chinese in style, the painting method of the landscape scenery being in the traditional monochrome manner, with only the figures being foreign. Starting from the Yongle reign of the Ming dynasty, the decorations of blue-and-white wares departed from the complex and dense decorations found in the Yuan dynasty (1271–1368), focusing more on the visual effect of leaving white blank spaces. Such underglaze blue against more white of the body allows the pure and beautiful qualities to stand out further. This work is a marvelous example of official Yongle ware in terms of the glaze color and the landscape decoration with figures. 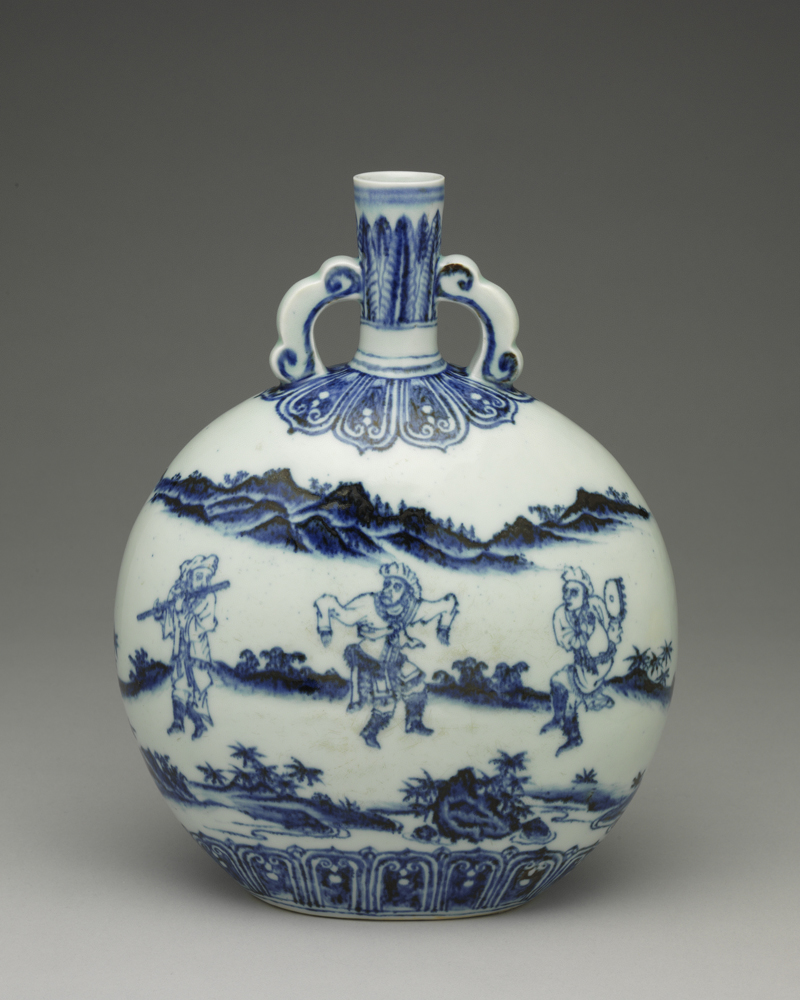