Bronzes have been cast in China for about 3,700 years. Most Chinese bronzes of about 1500–300 BC, roughly the Bronze Age in China, may be described as ritual vessels intended for the worship of ancestors, who are often named in inscriptions on the bronzes. Many were specially cast to commemorate important events in the lives of their possessors. These ritual vessels of ancient China represent possibly the most remarkable achievement in the whole history of metalcraft before modern times.

In the Shang dynasty (c. 1600–1046 BC), the right to cast or possess these vessels was probably confined to the royal house itself originally but later was bestowed upon local governors set up by the ruler; still later, in the Zhou dynasty (1045–256 BC), the right was claimed by rulers of the feudal states and indeed by anyone who was rich and powerful enough to cast his own vessels. Further, from the arrangement and quantity of bronzes displayed in a given ceremony, one can discern the specific social status and position of that noble host. Bronzes were thus the most important ritual objects in the aristocratic Shang and Zhou.

In many aspects, these two early dynasties were crucial to the formation of Chinese culture. Politically, with a burgeoning humanistic awareness the rule by theocracy gradually transitioned to that of rituals and proprieties. Materially, the advanced bronze smelting and casting skills initiated a new age of ritual vessels and weaponry; the breakthrough in craftsmanship and technologies gave rise to a wide range of flourishing industries. Spiritually, the two primary affairs of the state, worship and warfare, conveyed via various shapes and patterns of ritual bronzes the awe for and communion with deities as well as ancestors. Last but not least, the bronze inscriptions recorded the ritual occasions these vessels were made for: feast rites, military action, and reward or conferment ceremonies.

Already by late Zhou times, the more expensive medium of lacquer was often used in place of bronze. Under the ultimate unification of Qin (221–206 BC) and Han (206 BC–AD 220), Chinese bronzes gradually yielded its central role in the ritual system but transformed into a cultural archetype, deeply imbued into and manifesting the essence of Chinese thought and culture: extensive and elaborate, profound yet moderate. 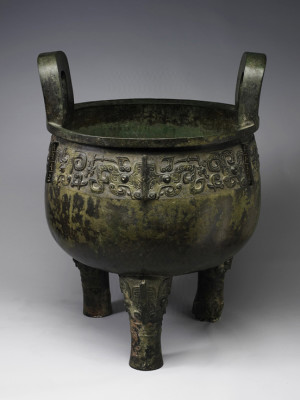 Cauldron to Ji from his Grandson 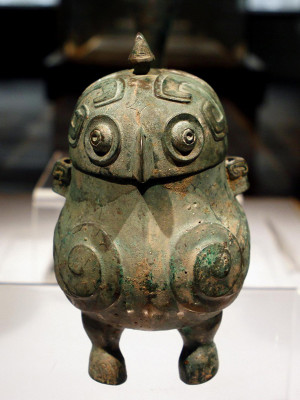 Wine Vessel in the Shape of Owl 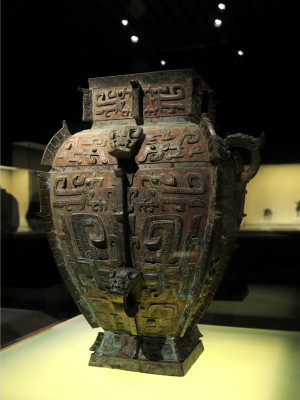