This handscroll of prized Sichuan silk was made in 1044 under the reign of Emperor Shenzong (神宗). Mi Fu used it to calligraph characters that were strongly influenced by those of Wang Xianzhi (王獻之, 344–386), son of the “Sage Calligrapher” Wang Xizhi (王羲之, 303–361), and that have an untrammeled and expansive feeling. The top and bottom grid lines were woven into the scroll with the vertical ones drawn in ink, indicating that this type of silk was especially made for calligraphy. The owner of this scroll of silk had asked renowned calligraphers to write on it, but they only made records at the end. He then encountered Mi Fu, who consented to write a long piece of calligraphy. The date that he included at the end of the scroll corresponds to the year 1088. Among the works of the Song masters, the brushwork and speed in Mi’s characters are the most lively and varied. Although done here within fine lines of black ink, Mi Fu’s running script flies with spirit and energy that is unrestrained by these “guidelines”. In fact, the unique quality of Mi Fu’s calligraphy lies in the great variety, which derives from his excellence in making use of every potential with the brush. The strokes—regardless of whether the brush tip is concealed or exposed, or whether they are plump or thin—all express the beauty of the art of writing. Indeed, this scroll imparts a sense of dashing and outstanding power, as if it was calligraphed with a joyful mood. This feeling derives from the strokes and forms of the characters dancing lightly and flying about the space in a vivid and free style. Mi Fu himself once wrote that calligraphing small characters is just like doing large ones, comparing it to a lion that tackles an elephant and uses all its might. This scroll is done in small characters and, when looking carefully at each—from applying to lifting the brush as well as from the first line to the end—many variations appear to the strokes and dots, and more characters appear slanted than straight. Song dynasty artists had a major influence on later developments in calligraphy with their running script (which was noted for its personal and exuberant manner) of which this scroll is an excellent example. 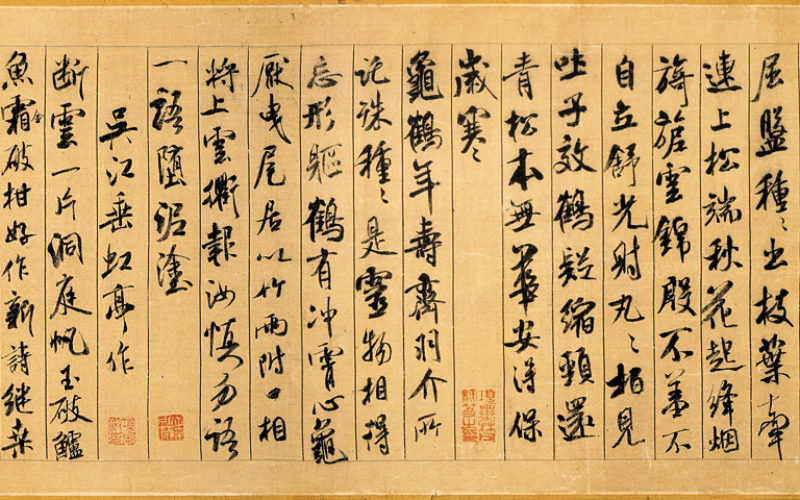