The seventh and youngest son of the famed Wang Xizhi (王羲之), Wang Xianzhi (王獻之) inherited his father’s talent for the art, although his siblings were all notable calligraphers. His style is more fluid than his father’s. Among his innovations is the one-stroke cursive script, which blends all characters in the writing in a single stroke.

Starting at a young age, he learned calligraphy from his father. It is said that his father once approached him from behind unnoticed and tried to pull out the brush from the hand of the then seven-year-old Wang Xianzhi. The son was holding the brush so tight that the father was unable to take it away. The father was very glad that Xianzhi had laid a solid foundation in calligraphy. Wang Xianzhi eventually became as accomplished as his father. They are known as the “Two Wangs.” 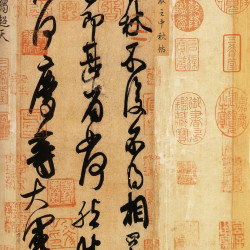 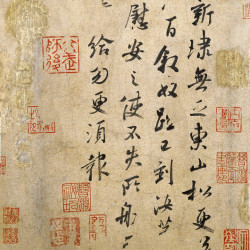 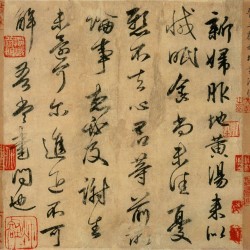