Early Period
Yan Zhenqing’s early stage lasted until his 50s. During these years, Yan Zhenqing tried out different techniques and started to develop his personal genre. When he was young, he studied calligraphy under the famous calligraphers Zhang Xu and Chu Suiliang. Zhang Xu was particularly skilled in the Cursive Script, which emphasizes the overall composition and flow; Chu Suiliang, on the other hand, was renowned for his graceful and refined Regular Script. Yan Zhenqing also drew inspiration from Wei Bei (魏碑) Style, which originated from Northern nomad minorities and focused on strength and simplicity.

In 752, he wrote one of his best-known pieces, Duobao Pagoda Stele (多寶塔碑). The stele has 34 lines, each containing 66 characters, and it was written for Emperor Xuanzong who was extremely pious to Buddhism at the moment. The style of the writing was close to that of the early Tang calligraphers, who emphasized elegance and “fancifulness”; yet it also pursues composure and firmness in the stroke of the brush, structuring characters on powerful frames with tender management on brushline.

Consolidating Period
This period ranges from Yan Zhenqing’s fifties to sixty-five. During these years, he wrote some famous pieces like Guojia Miao Stele (郭傢廟碑) and Magu Shan Xiantan Ji (痲姑山仙墰記). For individual strokes, he adopted the rule of “thin horizontal and thick vertical strokes”. Strokes’ widths were varied to show the curvature and flow, and the dots and oblique strokes were finished with sharp edges. For character structure, Yan style displays squared shape and modest arrangement, with spacious center portion and tight outer strokes. The emerging Yan style is very muscular, rich and controlled.

Consummating Period
In the last ten years of his life, Yan Zhenqing’s calligraphy accomplishment peaked. With established style, he continuously improved on each of his works, and completed his Magnum Opus, Yan Qinli Stele (顏勤禮碑), a tribute to his great grandfather. At this stage, he was able to fully exhibit his style at his will even through a single stroke, and under his modest and stately style bubbles the liveliness and passion.

Late Life
In 764, Emperor Daizong conferred the title of Duke of Lu (魯公) on Yan Zhenqing in recognition of his firm loyalty to the government and bravery during the An Lushan Rebellion. However, his unbendable character was resented by the incumbent Grand Councilor, Lu Qi (盧杞), and cost him his life.

In 784, the military commissioner of Huaixi (淮西節度使), Li Xilie (李希烈), rebelled. Lu Qi had held a grudge against Yan Zhenqing for a long time, so he sent Yan to negotiate with Li Xilie in the hope that Yan would be killed. As expected, Li Xilie tried all means to coax or threaten Yan to surrender, but Yan Zhenqing never wavered. According to the legend, Li Xilie set up a fire in the courtyard and told Yan that he would be burnt to death if not surrendering. Yet Yan Zhenqing did not show the slightest fear and walked towards the fire determinedly. Li Xilie could not help but to show respect to him. In 785, however, Yan Zhenqing was secretly strangled in Longxing Temple (龍興寺) in Caizhou, Henan.

Upon hearing his death, Emperor Daizong closed the assembly for five days and conferred the posthumous title Wenzhong (文忠) on Yan Zhenqing. He was also widely mourned by the army and the people. A temple was constructed to commemorate Yan. In the Song Dynasty, the temple was moved to Shandong and henceforth became a famous tourist attraction. 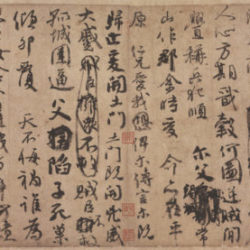 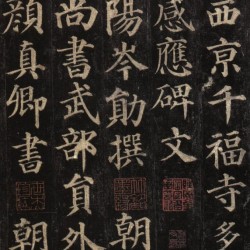 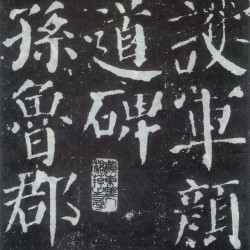