The Baotu Spring is located outside of the west gate of the old city wall of Ji-nan (濟南) in Shandong province. When Zhao Mengfu was an official in Ji-nan, he often traveled to this location. Gifted in all of the lofty art forms of poetry, prose, calligraphy, and painting, he was versed in all contemporary and ancient forms of calligraphy. In his early years, Zhao Mengfu studied the style of the Song dynasty emperor Gaozong, but later turned to the styles of Wang Xizhi (王羲之) and Wang Xianzhi (王獻之), in the end studying that of Li Yong (李邕). He was the greatest synthesizer of styles in calligraphy since the Tang dynasty (618–907).

Zhao Mengfu’s calligraphy was renowned for its perfect aestheticism. The poem in this work was done in the twelfth lunar month of 1295 and was done for his friend Zhou Mi (周密), like another famous painting—Autumn Colors on the Que and Hua Mountains. The calligraphy here is elegant and rounded, exactly in the style for which he was known. This is also a rare surviving example of large regular script by Zhao. The colophon mentions two poems, but only one survives here, indicating that the front of the scroll had been cut off sometime in the past. 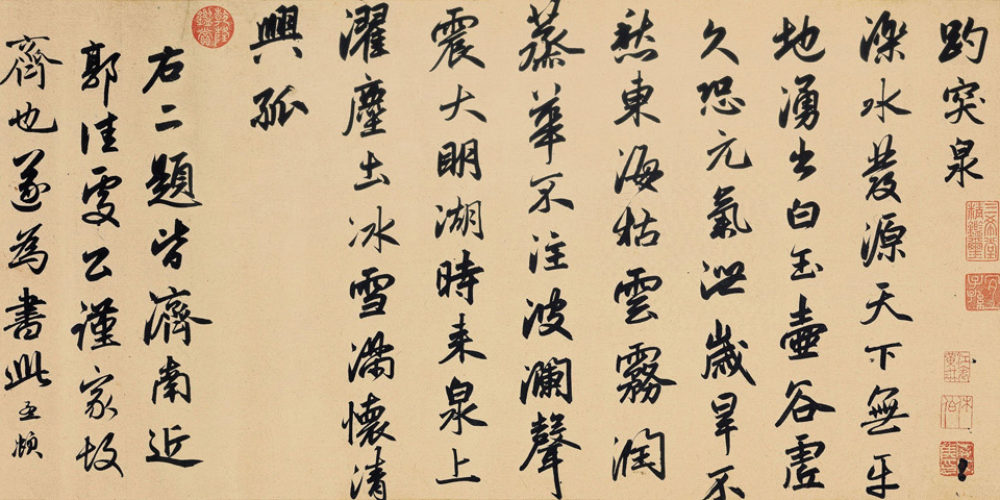 Poetry on the Baotu Spring