China is the native land of tea. With its unique fragrance and mellow sweet taste, its values to health, and ease of access by the masses, tea has brewed itself into Chinese history for more than 2,000 years. Over the dynasties, tea has been a part of life for people of all classes. By dint of cultural and economic exchange with other countries and regions, tea was introduced overseas and developed into one of the most popular beverages today.

Tea originally occurred in Southwestern China. Before becoming a common beverage, it was used as one of many ingredients for soups and medicines. As supported by written accounts, ancient Chinese began cultivating and using tea plants more than 2,000 years ago, and Bashu area (Sichuan and nearby regions) was the region of origin.

The earliest dedicated book on tea—and the one best known by far—is the Classic of Tea (茶經) written by Lu Yu (陸羽) in the Tang dynasty (618–907). Lu Yu recorded everything from how teas were grown and classified, to how teas should be chosen and cooked in the Classic of Tea, which became the first definitive guide to all things tea-related. The book elevated tea to a new level–an art–and made a monumental impact to how tea was perceived and drunk—an impact that lasted for centuries to come. With his exceptional contribution in the development of Chinese tea, Lu Yu has been honored as the “Sage of Tea” by later generations.

In the Classic of Tea, Lu Yu describes the set of utensils for boiling and drinking powdered tea, thereby establishing the precedent for the importance of the wares and utensils used in tea ceremonies. Descriptions of ice-like Yue ware celadon tea bowls and snow-white Xing ware porcelain tea bowls in the “Classic of Tea” reveal the aesthetic appreciation for tea wares in the Tang dynasty. 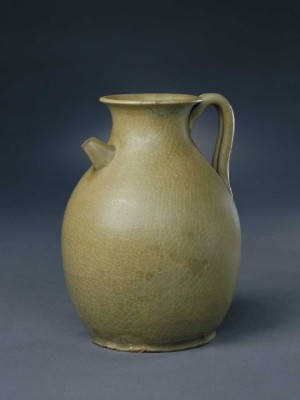 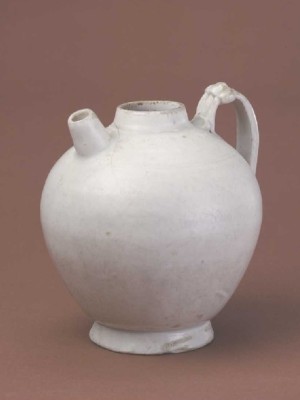 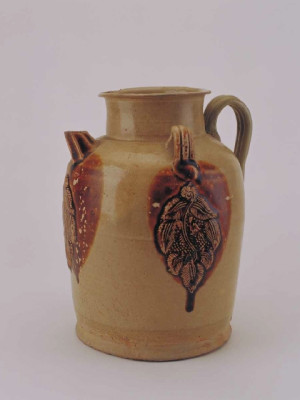 The Song dynasty (960–1279) was the golden age of powdered tea. The unique whisking method of preparation along with tea-brewing competitions brought the art of tea to its pinnacle of refinement. Molded cakes of tea as well as grinders, pots, and bowls for tea consequently were frequent subjects in poetry, calligraphy and painting that survives from this period. The lines “Clouds swirling on the surface of francolin-feather bowls, snowy depths at the bottom of hare-fur cups (鷓鴣碗面雲縈宇，兔褐甌心雪作泓)” shows that, in addition to celadon and white wares, black-glazed bowls with francolin-feather-like or hare-fur-like decoration became prized wares in tea competitions. Tea bowls and bowl stands were paired as sets, and ceramic and lacquer bowl stands in various glazes became common. 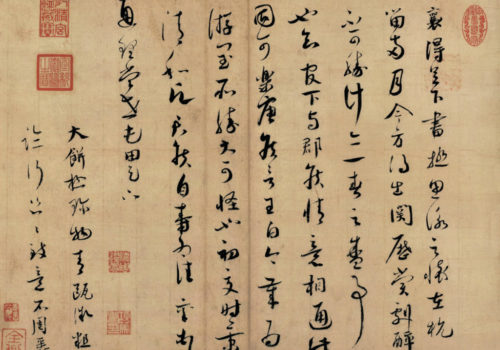 This piece of calligraphy is a letter written by Cai Xiang (蔡襄), a famous calligrapher and scholar, to his friend Feng Jing (馮京) in the fourth month of 1051 on the day that Cai Xiang left Hangzhou. The content expresses his regards to Feng upon embarking on his journey. In the letter, Cai mentioned that he included a gift of “large dragon” caked tea and a Yue celadon tea bowl. At the time, both were considered precious, especially the “large dragon” tea which was probably produced as tribute to the court. Cai Xiang, when he was in office in Fujian in 1047, oversaw the production of “small dragon” tea for tribute to the court. Neither it nor the “large dragon” tea was readily available to ordinary people.

A native of Fujian province, Cai Xiang made an important contribution to the history of tea with his Record of Tea (茶錄). The earliest Song text on the subject, it describes the production and transportation of “small dragon” tea as tribute to the court and is also the first to mention the famous Jian ware “hare’s fur” bowls. 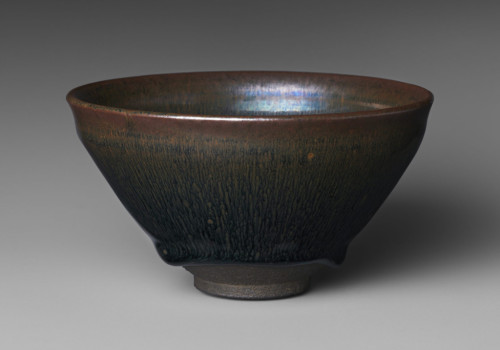 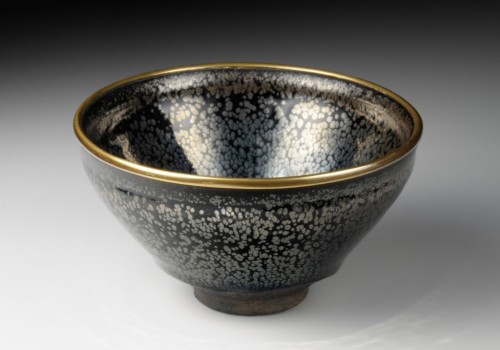 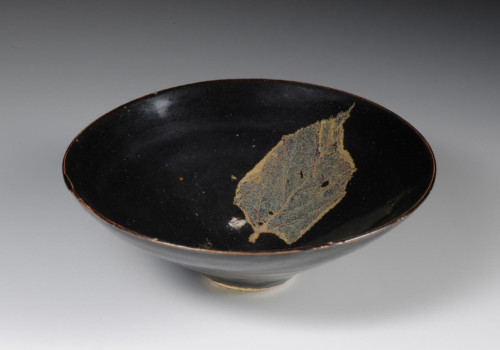 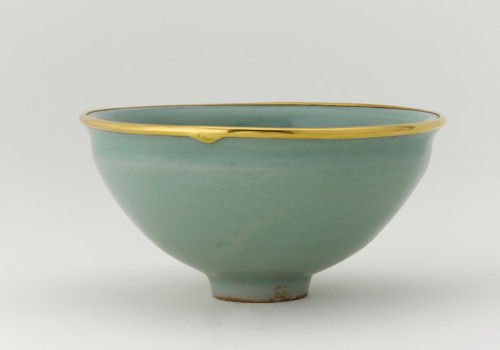 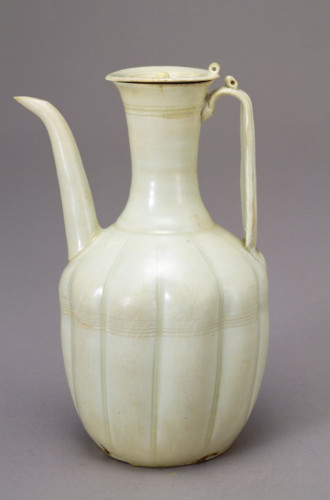 In 1391, the founder of the Ming dynasty, the Hongwu emperor, decreed that tributes of compressed tea cakes were to be replaced by loose-leaf tea. This meant steeping became the main method for preparing tea. Tea pots for steeping and bowls and cups for drinking were the most important tea wares in the Ming and Qing dynasties. The invention of over-glaze pigments added vibrant colors to tea wares. Tea caddies also became an essential item as they helped maintain the fragrance and flavor of the tea leaves. 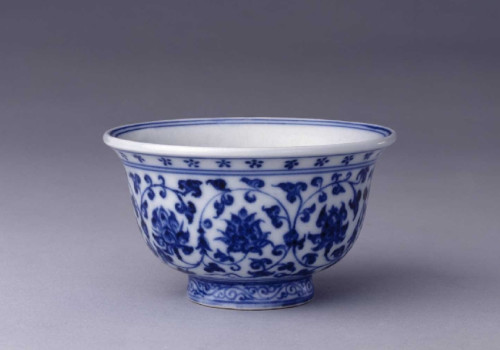 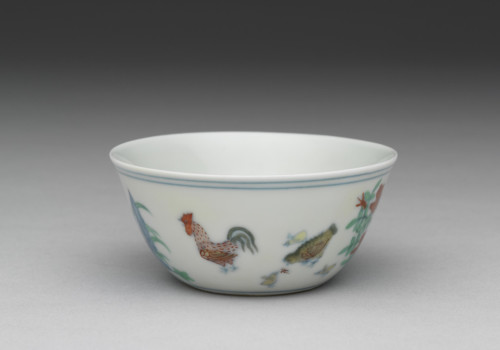 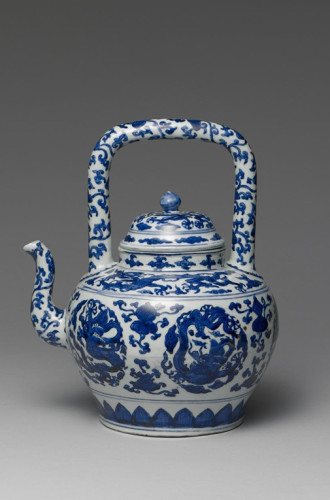 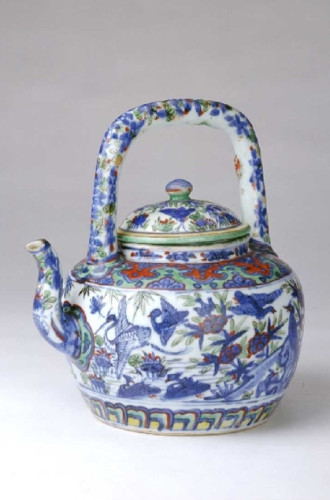 In Ming dynasty (1368–1644) painting, tranquil landscapes were often depicted with a small cottage and a neighboring tea hut. Amidst the various objects and equipment associated with tea preparation, attendants frequently are shown by a stove with boiling water to make tea. The host in such paintings either sips tea alone or is in light conversation with like-minded friends, revealing the idealized setting for consuming tea among scholar-officials in the Ming dynasty. Such artists as Shen Zhou (1427–1509), Tang Yin (1470–1523), Wen Zhengming (1470–1559), and Qiu Ying (1492–1552) in their works of poetry, painting, and calligraphy left behind many such elegant images of drinking tea. 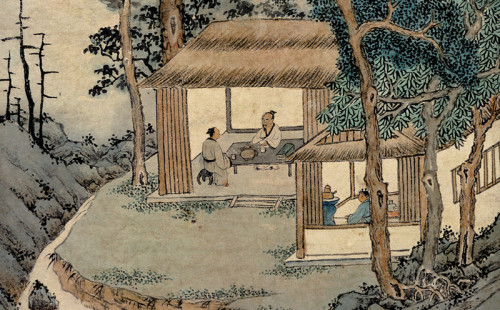 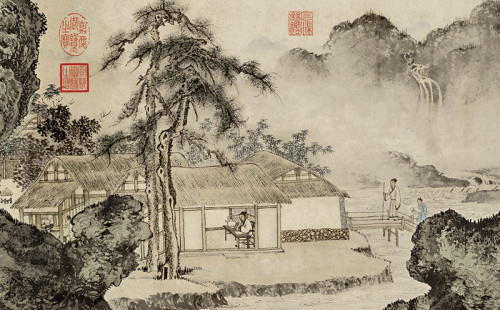 Beginning in the early 16th century, the clay teapot made in Yixing (宜興), on the west side of Lake Tai, started to become popular, catering to the tea taste of scholars in the nearby Suzhou area. Individually made, sometimes to order, rather than mass-produced, Yixing ceramic wares were often signed or even poetically inscribed by highly reputable master craftsmen, such as Shi Dabin (時大彬, 1573–1648) of the Wanli era. The clay wares were usually unglazed and derived their striking colors—brown, beige, reddish purple, yellow, black, and blue—after firing from the distinctive clays of the region and were known as “purple sand” teapots. Pieces alternated between complex floral shapes and exquisitely simple geometric designs. Since the 17th century, Yixing teapots have been exported to Europe, and are also known in the West as Buccaro, or Boccaro, wares. 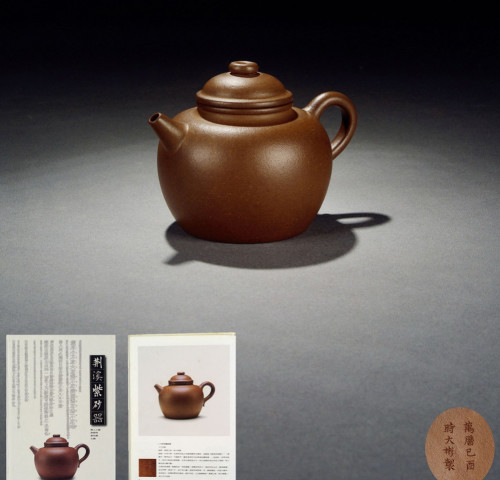 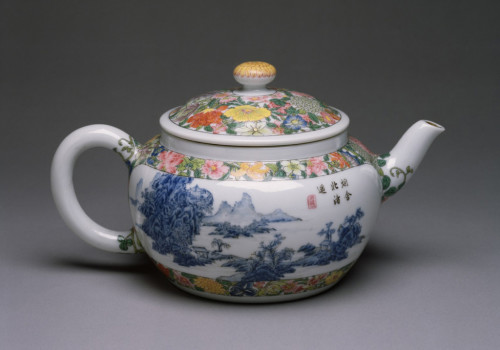 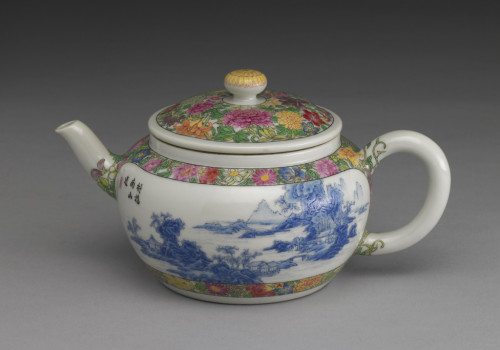 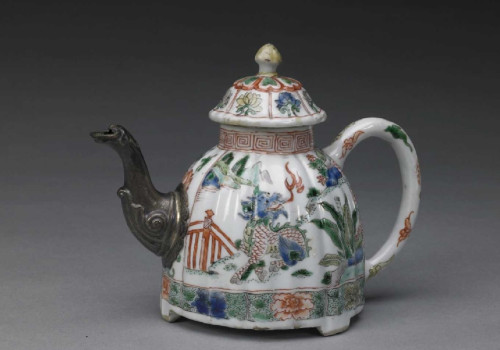 When speaking of tea, Chinese often use a phrase “it can also purify the mind (也可以清心)” to cite the wondrous effects of this drink. The refined and refreshing art of tea has filled Chinese artworks through the ages. Through the selection from various museum collections, it is hoped that you may learn more about the history and importance of tea as well as appreciate the beauty of Chinese painting, calligraphy, and ceramics.

The content on this page is based on texts from the Hong Kong Museum of Tea Ware and National Palace Museum in Taipei.