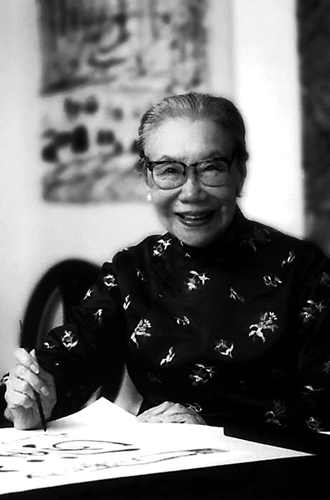 Fang Zhaolin (方召麐, 1914–2006) was born in Wuxi, Jiangsu province in east China in 1914 amid the turbulence that followed the collapse of Imperial China. Her father, a prominent industrialist, was assassinated when she was just eleven. Her mother believed in educating daughters—a view not prevalent at that time—and she had private tuition and attended several girls’ schools. Meanwhile she also studied Chinese painting with several masters including Qian Songyan (1899–1985).

In 1937, Fang Zhaolin left for university in the UK, at Manchester. She met her husband and they were there until 1939 when war broke out in Europe so she and her husband returned to China, enduring the next decade as refugees from the Sino-Japanese war and then civil war. Eventually they settled in Hong Kong with their eight children but sadly Fang Zhaolin’s husband died soon afterward.

At this point Fang Zhaolin took over her husband’s business, resumed her painting studies with extraordinary diligence and perseverance. She studied with the Lingnan School master, Zhao Shao’ang (1905–1998), and later with one of the most celebrated Chinese artists, Zhang Daqian (1899–1983). In her forties, she completed her university training in Hong Kong and then Oxford.

From the 1950s to the ’70s, Fang lived and traveled in Europe and America where she became knowledgeable about trends in modern Western painting. Her enduring passion was, however, the traditional Chinese style, rooted in national history and culture. The landscapes and the still lifes she painted were always, in her mind, depictions of home. She was fascinated by the simplicity of Han mural paintings (202 BC–AD 220) and she developed a distinctive style of her own in both figure paintings and in her landscapes which, from the 1970s, often combine calligraphic lines and forms to illustrate mountains and rocks instead of using the traditional method of ink strokes.

Fang Zhaolin led a remarkable life, from studying within the confines of a privileged household to traveling the world as an independent artist. She passed away in Hong Kong on February 20, 2006. 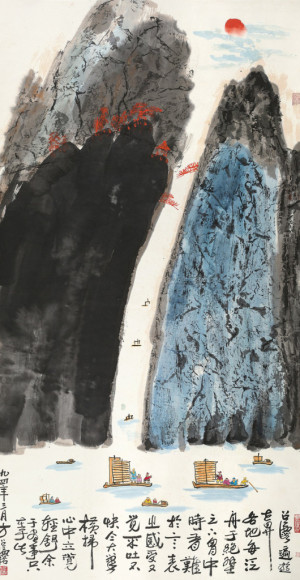 Boating under the Cliff 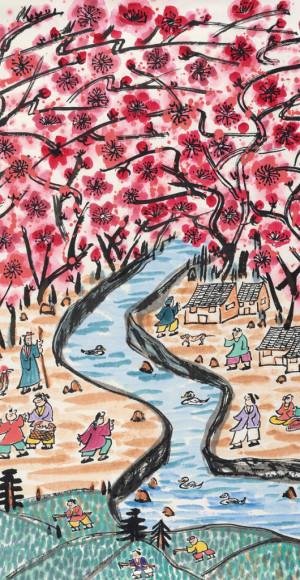 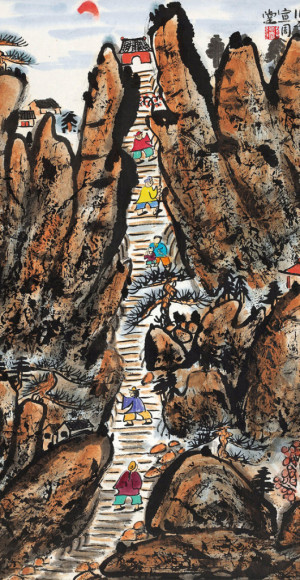