Han Gan, a leading horse painter of the Tang dynasty (618–907), was known for portraying not only the physical likeness of a horse but also its spirit. This painting, the most famous work attributed to the artist, is a portrait of Night-Shining White, a favorite charger of the emperor Xuanzong (712–756). The fiery-tempered steed, with its burning eye, flaring nostrils, and dancing hooves, epitomizes Chinese myths about imported “celestial steeds” that “sweat blood” and were really dragons in disguise.

This sensitive, precise drawing, reinforced by delicate ink shading, is an example of “baihua” (white painting) a term used in Tang texts on painting to describe monochrome painting with ink shading, as opposed to full color painting. The later term “baimiao” (white drawing) denotes line drawing without shading, as seen in the paintings of Li Gonglin (ca. 1041–1106).

The numerous seals and inscriptions added to the painting and its borders by later owners and experts are a distinctive feature of Chinese collecting and connoisseurship. While collectors are sometimes overzealous in showing their appreciation in this manner, the addition of seals and comments by later viewers served to record a work’s transmission and offer vivid testimony of an artwork’s continuing impact on later generations. 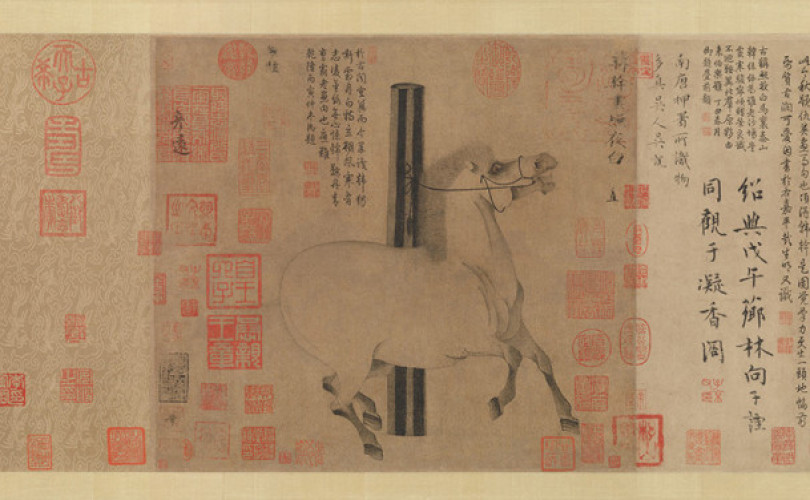