Lin Fengmian (林風眠, 1900-1991) is a Chinese painter and art educator who sought to blend the best of both Eastern and Western art.

The son of a painter, Lin Fengmian learned traditional Chinese painting techniques as a child. After graduating from high school, he moved to France, where he studied European painting at the Dijon Art College and the Ècole des Beaux-Arts in Paris. In 1922 his oil painting The Autumn was exhibited at the prestigious Salon d’Automne in Paris. The following year his Chinese ink paintings were again shown at the Salon d’Automne, and 42 of his paintings were displayed in the Exhibition of Chinese Ancient and Modern Art at Strasbourg, France.

In 1925 Lin Fengmian returned to Beijing, where he had his first solo exhibition one year later. Lin strove to capture the essence of both Eastern and Western art in order to achieve a new synthesis. He studied the stone engravings of the Han dynasty as well as the porcelain drawings of the Song and Yuan dynasties. He also emulated aspects of the distortion and simplification of Chinese folk art in his use of rich colors and bold, rapid brushstrokes. Into this he integrated the emotive qualities of European masters such as Henri Matisse, Pablo Picasso, and Georges Rouault. These influences led him to create paintings—set against a monochromatic background of ink wash-and-line drawing—that were deftly furnished with gorgeous colors set in forceful motion. The resulting rhythm of clear but changeable light and intense sentiment became known as the “Lin Fengmian Style.”

In 1927 Lin became a member of the Committee for the National Art Education and helped to establish the National Art College (now known as the Zhejiang College of Fine Arts). In 1938 he became director of the National Art Academy, an amalgamation of the Hangzhou and Beiping art academies. Lin Fengmian was a pivotal figure in shaping the development of Western art training in China. He went on to teach some of the most renowned painters in 20th-century China, including Li Keran (李可染), Wu Guanzhong (吳冠中), and Zhao Wuji (趙無極). He also published numerous articles that explored the interrelation of Eastern and Western art and discussed the future of Chinese painting.

In 1966 the artist was targeted by the Cultural Revolution. Fearing prosecution, Lin destroyed many of his experimental works but was nonetheless imprisoned for four years. In 1977, when the Revolution ended, he traveled to Hong Kong and had a hugely successful exhibition, the first of many successful international retrospectives of his work in the late 20th century. Lin Fengmian lived in Hong Kong in his late years. 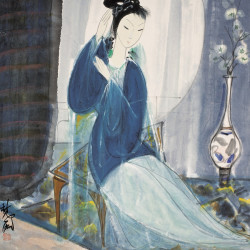 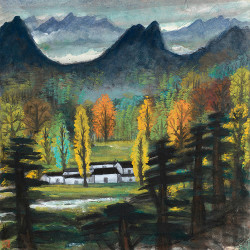 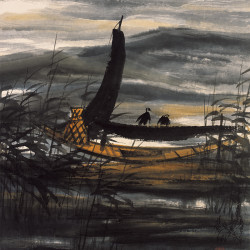