Mi Fu (米芾, 1051-1107), courtesy name Yuanzhang (元章), was a scholar, poet, calligrapher and painter who was a dominant figure in Chinese art. Of his extensive writings—poetry, essays on the history of aesthetics, and criticism of painting—a considerable amount survives.
Mi Fu was born of a family that had held high office in the early years of the Song dynasty (960–1279). Because his mother had been the wet nurse of the emperor Yingzong (reigned 1063–1067), he was brought up within the imperial precincts, mixing freely with the imperial family. As a young boy, Mi Fu showed precocious talent, particularly in calligraphy. Although he expressed distaste for the formal lessons prescribed for a future official, he displayed a lively intelligence in his quick understanding of learned argument, his aptitude for excitingly original poetry, and his ability in painting and calligraphy.
In later life Mi had a checkered official career, with frequent changes of post. He began as a reviser of books in the imperial library and subsequently served in three posts outside the capital of Kaifeng, in Henan province. In 1103 he was appointed a doctor of philosophy and was briefly military governor of Wuwei in the province of Anhui. He returned to the capital in 1104 to serve as a professor of painting and calligraphy, taking this opportunity to present to the emperor a painting by his son, Mi Youren (米友仁). He then undertook the position of a secretary to the Board of Rites before setting out on his final appointment as military governor of Huaiyang, in Jiangsu province, in which post he died at the age of 57. He was buried in Dantu, in Jiangsu province, under an epitaph written for him by Mi Youren.
Throughout Mi’s life, the workings of a highly individualistic temperament were evident. This was manifested in his fastidious attention to cleanliness, his preference for the clothes of ancient Chinese dynasties, and his love for strange rocks and ink stones, which he collected. His comparative failure in his official career was perhaps a result of this eccentric personality. Despite his undoubted ability, his friendship with the leaders of both principal political factions (the poet-statesman Wang Anshi 王安石 and Su Shi 蘇軾), and his family connections, he never rose to any office higher than that of a second-class secretary to the Board of Rites.
As an artist, Mi Fu is best known for his calligraphy and landscape painting. His calligraphic style rejected inaccessibly unusual or flamboyant approaches and was formed by patient and catholic study of the great Chinese calligraphers of the past. His theoretical writings in the Shu Shi (書史) and Haiyue Mingyan (海嶽名言), which contain some of the most penetrating remarks written on the subject of calligraphy, indicate that Mi believed in respect for historic styles suffused with the calligrapher’s own creative talent. Most of all he valued spontaneity and self-expression, eschewing the contrived and saccharine.
Mi Fu’s paintings represented a break with the past. Before the period of the Song dynasty, landscape painting in China had depended essentially on line for its description of the world. Mi, however, was concerned with depicting the misty rivers and hills of the lake district of Henan province and introduced a technique of extremely moist washes and horizontal texture strokes. Later known as “Mi dots” (米點), this technique rendered a vivid impression of that rainy and cloud-clad Chinese region. He is grouped with the Southern School of scholar-painters in the lineage of Wang Wei (王維) and Dong Yuan (董源). 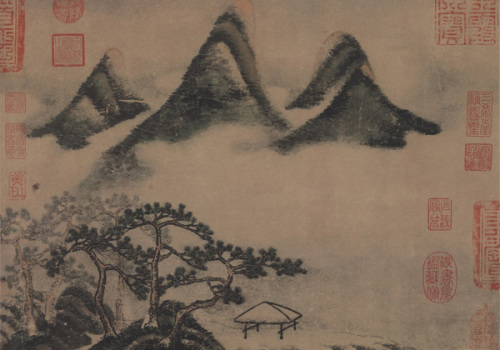