Qiu Ying (仇英, ca. 1494–1552), courtesy name Shifu (實父) and pseudonym Shizhou (十洲), originally came from Taicang in Jiangsu, but he later moved to Suzhou. Qiu Ying was a painter by profession. Despite his family’s humble origins, he had natural talent and skill in painting. At an early age, he learned the art of painting from the famous Suzhou artist Zhou Chen (周臣, ca. 1450–1535). Qiu Ying was also influenced by Wen Zhengming (文徵明, 1470–1559) and Tang Yin (唐寅, 1470–1524). His achievements in painting consequently received the accolades of the Suzhou literati as well.

Qiu Ying also associated with important art collectors at the time, such as Zhou Fenglai (周鳳來, 1523–1555), Chen Guan (陳官, ?–after 1557), and Xiang Yuanbian (項元汴, 1525–1590). With his special gift for copying paintings, Qiu Ying found favor among collectors, bringing him an opportunity to copy and learn from Song and Yuan dynasty paintings in the collections of the Jiangnan area and greatly broadening his artistic scope. As Qiu Ying’s skills in painting matured, a style of his own gradually emerged and took form. His paintings on figure, landscape, and flower subjects all therefore have an originality of his own. Qiu Ying’s painting style is not only refined and consummate, it also has the delicately graceful air of literati art as well. Thus, after Zhou Chen passed away, Qiu Ying stood alone in this way for roughly two decades in Jiangnan.

Members of Qiu Ying’s family, such as his daughter, Qiu Zhu (仇珠, fl. 16th c.), and son-in-law, You Qiu (尤求, fl. 16th c.), followed him in painting. Qiu Zhu’s style is delicate and beautifully refined, while You Qiu also inherited his father-in-law’s manner but especially excelled at “baimiao (白描)” fine-line figure painting in ink. Furthermore, accompanying the great economic expansion that took place in the middle of the Ming dynasty, Qiu Ying’s paintings were imitated in large numbers during his own lifetime to meet the demand for his art, his name added to untold numbers of works done by professional artists.

Qiu Ying is regarded as one of the “Four Masters of Ming (明四家)”, along with Shen Zhou, Wen Zhengming, and Tang Yin.

Where the Truth Lies: The Art of Qiu Ying

Spring Morning in the Han Palace

Along the River During the Qingming Festival 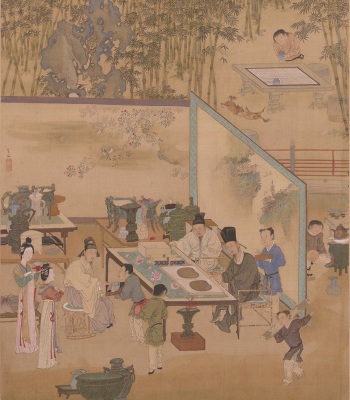 Appreciating Antiquities in the Bamboo Garden 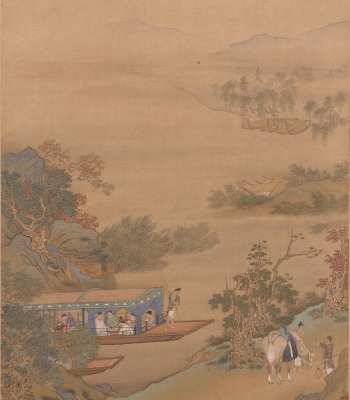 Song of Pipa at Xunyang

Buildings and Pavilions on the Celestial Mountains

Fishermen in Reclusion at the Lotus Stream