This long handscroll work is an imaginary representation of various activities in a Han dynasty (206 BC–AD 220) palace on a spring morning. Among them is the famous story of Mao Yanshou (毛延壽) painting the portrait of Wang Zhaojun (王昭君). As the story goes, the concubines of Emperor Yuandi (r. 48–33 BC) were so numerous that he ordered the artist Mao Yanshou to paint their portraits in order to choose them for attendance. Except for the righteous Wang Zhaojun, all the concubines bribed the artist to portray them even more beautiful. For not receiving a bribe, the artist portrayed Wang less beautiful, ruining her chances of seeing the emperor. One day, when a barbarian chieftain came to the court seeking relations, he sought a Han beauty as his wife. The emperor, believing Wang Zhaojun to be the least attractive of the concubines, chose her as the chieftain’s wife. Only when he saw her did he realize that she was the most beautiful of them all. Infuriated, he had the artist executed.

This work with an intricate composition leading from right to left is rendered with crisp brushwork and beautiful colors. Trees and rocks decorate and punctuate the garden scenery of the lavish palace architecture. In addition to groups of beauties, some of them are shown in leisure activities associated with the literati, such as enjoying the zither, chess, calligraphy, and painting as well as appreciating antiquities and flowers. 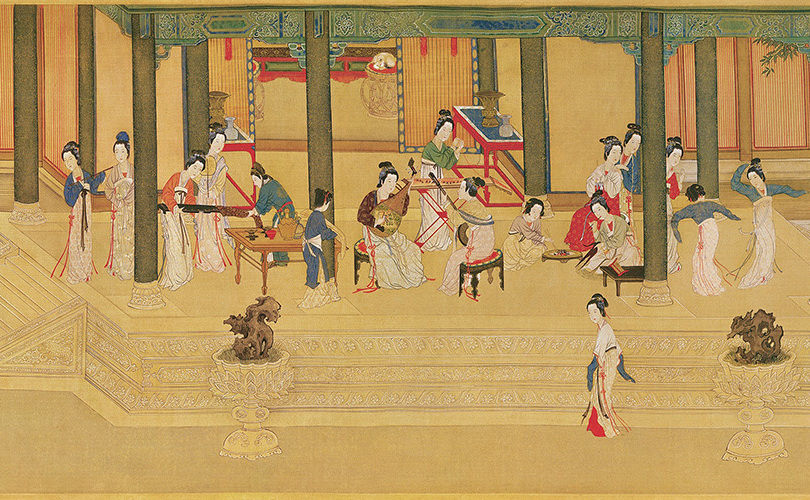