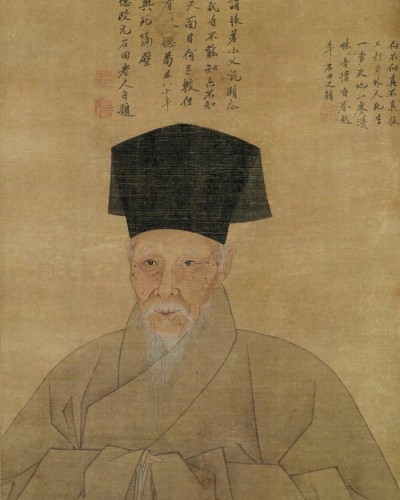 Shen Zhou (沈周, 1427–1509), courtesy name Qinan (启南), was a Chinese painter in the Ming dynasty (1368–1644). He was born into an honored and wealthy family in Changzhou (長洲), which is modern Suzhou (蘇州) in the south of Jiangsu province. Shen Zhou never took up any official post, but instead enjoyed a long life involved in the learned arts of poetry, painting, and calligraphy.

Shen Zhou’s many paintings reveal an active concern with preserving the aesthetic discoveries of bygone ages as well as a similar concern with nature in its many manifestations (especially landscapes). However various in stylistic source and subject matter, Shen Zhou’s art consistently bears his unique touch of an abiding confidence, restrained calmness, and subtle warmth. The ideal of his life and the accomplishments of his art have earned him reverence by all artists devoted to the ideals of the literati (wenren, 文人) tradition. He is regarded as one of the painting elite—“the Four Masters of Ming” (明四家), which also includes Wen Zhengming (文徵明), Tang Yin (唐寅) and Qiu Ying (仇英).

Shen Zhou lived at a pivotal point in the history of Chinese painting. He contributed greatly to the artistic tradition of China, founding the new Wu School in Suzhou. Under the Yuan dynasty (1271–1368), painters had practiced with relative freedom, cultivating a more “individualist” and innovative approach to art that deviated noticeably from the more superficial style of the Song court artists who preceded them. However, at the outset of the Ming, the Hongwu Emperor (reigned 1368–1398) decided to import the existing master painters to his court in Nanjing, where he had the ability to cultivate their styles to conform to the paintings of the Song masters. As Hongwu was notorious for his attempts to marginalize and persecute the scholar class, this was seen as an attempt to banish the gentry’s influence from the arts. The dominant style of the Ming court painters was called the Zhe School, as the leading figure—Dai Jin (戴進, 1389–1462)—and many of his followers were from Zhejiang province. However, following the ascension of the Yongle Emperor (reigned 1402–1424), the capital was moved from Nanjing to Beijing, putting a large distance between imperial influence and the city of Suzhou. These new conditions led to the rise of the Wu School of painting, a somewhat subversive style that revived the ideal of the inspired scholar-painter in Ming China.

Shen Zhou’s scholarly upbringing and artistic training had instilled in him a reverence for China’s historical tradition that influenced both his life and his art from an early age. Magnanimous by nature, he was an able poet, essayist, calligrapher, as well as an excellent painter. His work is unsurpassed in all Chinese art for its humane feeling; the gentle and unpretentious figures he introduced give his paintings great appeal (see his Poet on a Mountain Top). Shen Zhou commanded a wide range of styles and techniques, on which he impressed his warm and vigorous personality. In landscape, he often painted in the manner of the Yuan masters, but his interpretations are more clearly structured and firmer in brushwork. It is said that Shen Zhou mainly followed the Yuan painter Wang Meng (王蒙, 1308–1385) before 40. After 40, he followed the styles of Huang Gongwang (黃公望, 1269–1354), and then Wu Zhen (吳鎮, 1280–1354). Shen Zhou once acquired the famous Dwelling in the Fuchun Mountains by Huang Gongwang. After it was stolen, he painted a new scroll based on his memory (see both paintings here).

Although best known for his landscapes, Shen Zhou was equally talented in depicting flowers, fruits and vegetables, and animals in monochrome ink. He also became the first to establish among the literati painters a flower painting tradition. Shen Zhou’s flower-and-bird paintings, executed in the “sketching ideas (xieyi 寫意)” style, were followed with greater technical versatility by Chen Chun (陳淳, 1483–1544) and Xu Wei (徐渭, 1521–1593) in the Ming and then by Shitao (石濤, 1642–1707) and Zhu Da (朱耷, 1626–1705) of the early Qing. Their work, in turn, served as the basis for the revival of flower-and-bird painting in the late 19th and the 20th century.

Bidding Farewell at the Tiger Hill 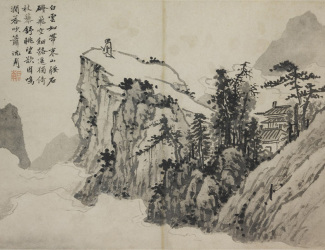 Poet on a Mountain Top 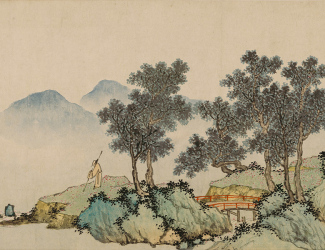 Wind and Snow at the Ba Bridge

A Graceful Gathering at Wei’s Garden

Crossing a Bridge to Visit Friends

Reluctant Departure at the Tiger Hill

Giant Pine Extending to the Sky

Filial Crow in the Tree