Wang Wei (王維, 701-761), courtesy name Mojie (摩詰), was one of the most famous men of arts and letters during the Tang dynasty (618-907), one of the golden ages of Chinese cultural history. He is also called Wang Youcheng (王右丞, Minister Wang of the Right). Wang Wei is popularly known as a model of humanistic education as expressed in poetry, music, and painting. In the 17th century the writer on art Dong Qichang (董其昌, 1555-1636) established Wang as the founder of the revered Southern school of painter-poets, whom Dong characterized as more concerned with personal expression than surface representation.

Wang Wei was born and brought up during the Tang dynasty when the capital, Chang’an (長安), was a truly cosmopolitan city that enjoyed both wealth and security. He received the prestigious jinshi (“presented scholar”) degree in the imperial civil-service examination system in 721—probably more for his musical talents than anything else, although he is said to have revealed his literary talents as early as age nine. He rose to high office but was soon demoted and given an unimportant position in Jizhou (濟州), before being recalled to the capital in 734 and given a post in the censorate. In 756, when Chang’an was occupied by the troops of the rebellious general An Lushan (安祿山), Wang Wei was captured and taken to the rebel capital at Luoyang (洛陽), where he was forced to accept a post in the administration. After Chang’an and Luoyang had been recaptured by the imperial forces in 758, Wang was saved from disgrace because of the loyal sentiments expressed in a poem he had composed while a prisoner of the rebels and because of the intercession of his brother Wang Jin (王縉), an imperial high official. Toward the end of his life Wang Wei became disillusioned; further saddened by the deaths of his wife and mother, he withdrew into the study of Buddhism at his country villa at the Wangchuan (輞川, “Wheel River”), where many of his best poems were inspired by the local landscape.

Wang Wei’s art can only be reconstructed theoretically on the basis of contemporary records and surviving copies of his paintings. He undoubtedly painted a variety of subjects and employed various styles, but he is particularly renowned for being among the first to develop the art of landscape painting. He is best known for ink monochrome (shuimo) landscapes, especially snowscapes. The latter demanded the use of pomo (破墨, “breaking the ink”), a broader ink-wash technique with which he is typically associated.

Wang Wei’s paintings were both innovative and traditional, but certainly it was his combination of masterful painting and poetic skills that brought about his almost mythical status in later ages. Virtually every anthology of Chinese poetry includes his works, and he is mentioned alongside Li Bai (李白, 701-762) and Du Fu (杜甫, 712-770) as one of the greatest poets of the Tang dynasty. 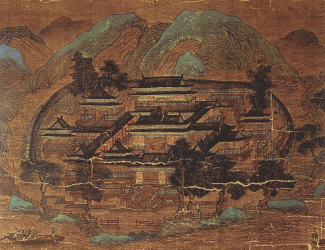 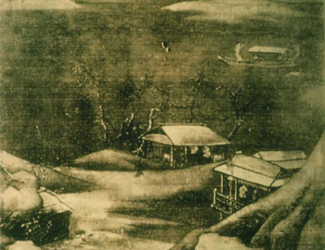 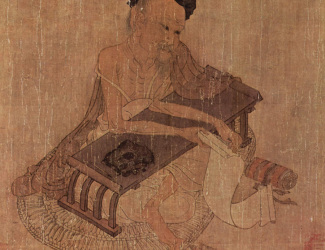