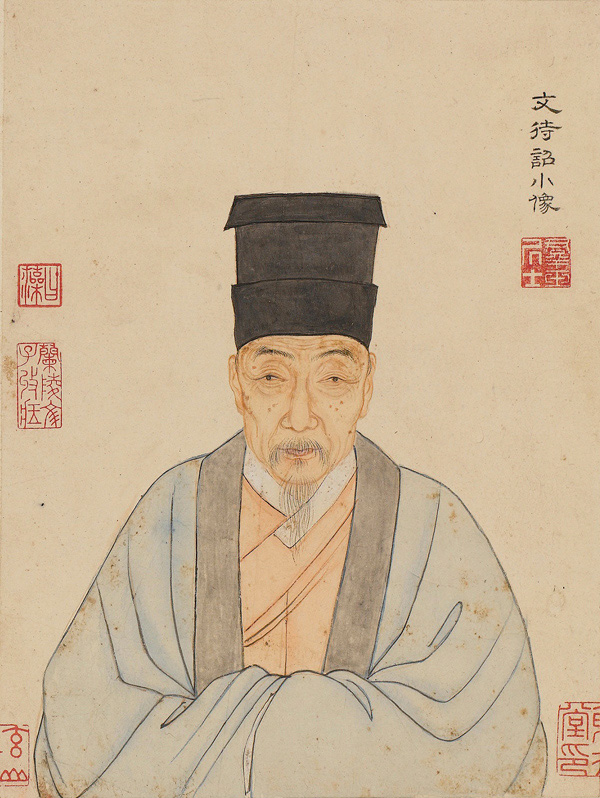 Conscientious in nature, for many years Wen Zhengming aspired to a career in office. After failing nine times at the civil service examinations in the capital, in 1523 he was finally recommended as a Hanlin Academician-in-Attendance at court. Later, however, differences between life as an official and his personal ideals led him to resign in 1526 and return to his hometown, whereupon he devoted his life to poetry, calligraphy, and painting instead.

In calligraphy, Wen Zhengming studied a wide range of artworks from the past. An exceptionally diligent student, he himself said that practicing calligraphy was one of his daily activities upon waking up every morning, never tiring of it throughout his life. Wen came to excel at the major calligraphic types, with small regular and running scripts most reflecting his personal style. His small regular script is sharp and orderly, and even at the age of ninety he could still do tiny “gnat’s-head” writing. Wen’s running script is also elegant yet vigorous, with most of such surviving works tending towards semi-cursiveness.

As for painting, Wen Zhengming first took Shen Zhou (沈周) as his teacher, but later with his family’s rich collection of art and his extensive social network, he had the opportunity to study and appreciate the works of ancient masters, establishing a unique style of his own. Gifted at using both ink and colors, the gradations of his light and dark ink tones are as varied as they are dynamic. In coloring, Wen mostly worked with washes of blue and green. Despite the use of bright colors, he was able to give them a refreshingly pure and elegantly light harmony. Wen Zhengming’s brushwork appears mainly in two types, fine and coarse. His fine style features a sense of beautiful smoothness and pure force, while the coarse one reveals his hoary strength and mature skill. With considerable ability in both painting and calligraphy, he often applied calligraphic brushwork to his paintings. In terms of subject matter, Wen Zhengming mostly painted landscapes, but he also occasionally did figural and bird-and-flower themes. Sometimes abbreviated and at other times sedate, they all reflect the refined ease and spirit of the literatus.

Wen Zhengming is regarded as one of the “Four Masters of Ming” (明四家), which also include Shen Zhou (沈周), Tang Yin (唐寅), and Qiu Ying (仇英). The longest living of the four and attracting many students, Wen Zhengming had sons who followed his footsteps and many disciples as well. Consequently, he had a great impact on painting and calligraphy of the middle and late Ming dynasty and became known along with Shen Zhou as a leader of the Wu School.

Garden of Pleasure in Solitude

Graceful Gathering at the Orchid Pavilion

Old Trees by a Cold Waterfall

Contending Greenery among Thousands of Cliffs

Contending Streams among Myriads of Valleys

Guests Arriving at a Mountain Villa

Shady Trees in a Summer Landscape