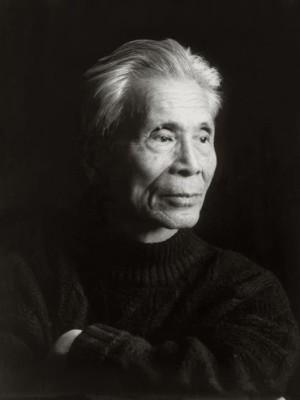 Wu Guanzhong (吳冠中, 1919–2010) is one of the best known contemporary painters of Chinese origin. He has painted various aspects of China including much of its architecture, plants, animals, people, as well as many of its landscapes and waterscapes in a style reminiscent of the impressionist painters of the early 1900s. He has published collections of essays and dozens of painting albums. His paintings were exhibited at the British Museum in 1992, which was the first for a living Chinese artist.

Wu Guanzhong was born in Yixing (宜興), Jiangsu province, in 1919. In 1935, Wu passed the entrance exam and studied electrical engineering at Zhejiang Industrial School (浙江公立工業專門學校), a technical school of Zhejiang University in Hangzhou. A year later, under the influence of Zhu Dequn (Chu Teh-Chun), he transferred to the National Arts Academy of Hangzhou, studying both Chinese and Western painting under Pan Tianshou (潘天壽, 1897–1971) and Lin Fengmian (林風眠, 1900–1991).

When war came in 1937, Wu moved with the school to the far west—first to Yunnan, then to Chongqing, the wartime capital, where Lin Fengmian, who had spent several years in France, fired his most gifted students with a longing to go there. Wu, Zhu and the equally gifted Zhao Wuji (Zao Wou-Ki) set about learning French, and in 1947 Wu traveled to Paris to study at the École Nationale Supérieure des Beaux-Arts on a government scholarship. A favorite student of Jean Souverbie, Wu Guanzhong has told of his admiration for Utrillo, Braque, Matisse, Gauguin, Cézanne and Picasso, and especially for Van Gogh, to whose grave he has made pilgrimage.

After returning to China in 1950, Wu Guanzhong introduced aspects of Western art to his students at the Central Academy of Art in Beijing. The Academy was known to have been dominated by social realism and Wu was called “a fortress of bourgeois formalism”. Refusing to conform to political dogma, he was transferred from one academy to another. At the start of the Cultural Revolution in 1966, he was banned from painting, writing and teaching, and in 1970 was sent to Hebei Province for hard labor.

In 1973 Wu Guanzhong was one of the leading artists brought back from the countryside—on the initiative of Zhou Enlai—to decorate hotels and restaurants. To prepare for a large wall painting at the Beijing Hotel, Wu and several other artists traveled along the Yangtze River to sketch ideas and seek inspirations. Although the project was finally abandoned as a result of another political movement, Wu Guanzhong successfully completed the draft scroll The Yangtze River in 1974. Wu Guanzhong’s rehabilitation was marked by an exhibition of his works in 1978 at the Central Academy.

Wu’s paintings have the color sense and formal principles of Western paintings, but a spirit and tonal variations of ink that are typically Chinese. Natural scenery is reduced to its essentials – simple but powerful abstract forms. He has had solo exhibitions in major art galleries and museums around the world, including mainland China, Hong Kong, Taiwan, Singapore, Japan, Korea, England and the USA.

Get updates on amazing artworks

The paintings are mounted with silk, but come without wooden frames.