The crane, which symbolizes longevity and auspiciousness, is regarded as one of the links between divinity and humanity in Taoism. In the past, people believed that cranes could guard the supremacy of the imperial power. During the Northern Song dynasty, the crane was also a metaphor for hermits and virtuous officials. These symbols coincided with the Taoist emperor, Huizong’s ambition for lasting stability and peace for the empire.

On the day after the Lantern Festival in 1112, Emperor Huizong saw a flock of cranes hovering at the Xuande Gate of his imperial palace. The timing was quite special—he was just about to finish his twelfth year at the throne. In Chinese culture, twelve years mark a complete earthly cycle. People believed that an emperor who governed for twelve years could achieve higher splendor. Therefore Huizong saw this scene as a sign of auspiciousness and painted it on silk.

At that time, traditional flower-and-bird painting had already reached the pinnacle. However, most of the flower-and-bird paintings depicted intimate scenes such as exquisite courtyards. Emperor Huizong took a different approach by placing his view upon the wide sky. His composition was very bold. The bottom one third of the painting shows the upper part of the palace gate surrounded by clouds which also represent auspiciousness, while the clear sky with flying cranes occupies more than two thirds of the painting.

Huizong often put his signature on paintings that he approved of from his court artists, so it is not easy to tell whether a painting with his signature is actually from his own hands. However, this painting is generally believed to be done by Huizong himself. It is accompanied by a poem that Huizong composed to commemorate the auspicious occasion. This artwork is a great example of the three perfections of poetry, calligraphy, and painting. 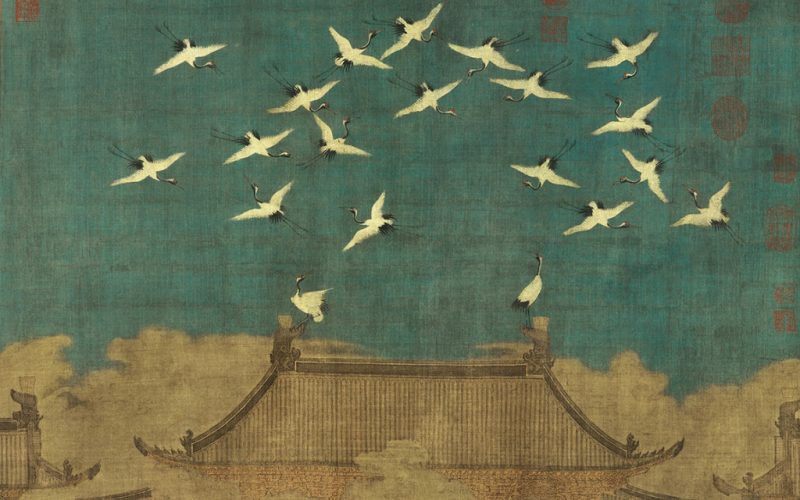