Autumn Colors on the Que and Hua Mountains (鵲華秋色)

Although Zhao Mengfu descended from the Song imperial family, he served the following Yuan dynasty as a prominent official in the Hanlin Academy. He was also one of the most influential painters and calligraphers of his day, and his style had a great impact on generations to come. Zhao Mengfu’s inscription on this handscroll reads, “The father of Gongjin (公謹, 1232-1298) was a native of Qizhou (齊州). After retiring from office in Qizhou and on my way home, I visited the scenery of the area to describe it for Gongjin. Mt. Hua-bu-zhu (華不注山) is known as the most famous mountain in the area, having been known from antiquity and unique for its sharp peak. Therefore, I did this painting of it. To the east is Mt. Que (鵲山), so I gave this work the title ‘Autumn Colors on the Que and Hua Mountains.’ Done by Zhao Mengfu of Wuxing in the twelfth lunar month of the first year of the Yuanzhen era [i.e. January or February of 1295].” The inscription indicates that the painting was done by Zhao at the age of 41 for his close friend Zhou Mi (周密, courtesy name Gongjin). Zhou Mi’s ancestral hometown was in the Ji-nan (濟南) region of Shandong. However, he lived his entire life in the south and could not return to his hometown. Since Zhao Mengfu served as a magistrate in the Shandong region, he took the opportunity upon leaving office to go first to Zhou Mi’s hometown before returning home. After he arrived home, Zhao painted the unique scenery of Hua-bu-zhu Mountain and Que Mountain from memory. These two mountains are shown in the painting as not very far apart, but they are actually many kilometers apart. Despite taking artistic license with the distance, Zhao has accurately conveyed the most salient features of these two mountains. The hills and shoals are done in Dong Yuan hemp-fiber strokes and the coloring is archaic blue-and-green for a revivalist manner. The texture strokes, however, are calligraphic, reflecting Zhao’s own innovation. The work brims with clarity, ease, and calm. Reality, memory, tradition, and creativity merge to form a new style that evokes the imagery of mind and heart. Thus, this painting was done in an intentionally naive and archaistic manner in which Zhao sought to convey the scenery in terms of a classical elegance, and he successfully conveyed the heritage and beauty of the region. 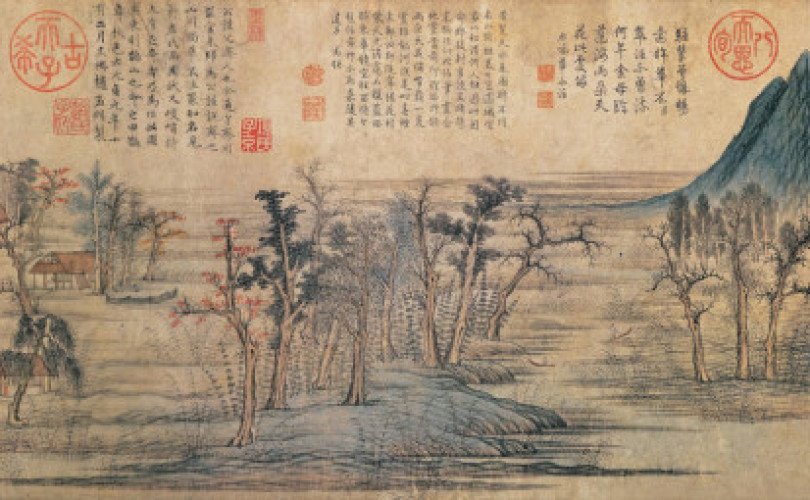 Autumn Colors on the Que and Hua Mountains