Centered in the wealthy commercial city of Suzhou, the Wu School takes its name from a kingdom that ruled the area in antiquity (12th c. BC–473 BC). The region is on the south of the Yangzi (Yangtze) River and thus known as Jiangnan (江南, literally, River South). Suzhou was a major transportation hub on the Grand Canal, which stretched 1,100 miles between the former imperial capital Hangzhou to the south and the Ming imperial capital in Beijing far north. A grid of small rivers and as many as three hundred stone bridges crisscrossed the city.

Suzhou had enjoyed a prominent political, economic, and cultural position for most of its two thousand-year history. During the Ming dynasty (1368–1644), it became a leading center of literati culture. Situated on the flat fertile land between the Yangzi River and Lake Tai, Suzhou was dotted with temples and spacious residences boasting elegant walled gardens, which served as the personal retreats and literary gathering places for the scholar artists in the region.

The Wu School encompassed both professional and literati, or scholar-gentleman, artists. Professional artists produced beautifully polished works on popular themes. Gentleman artists often created painting and calligraphy for each other and their brushwork and themes tended to be nuanced and personal in nature. Poetry was the primary method of social exchange for gentleman artists, as well as their most widely practiced form of self-expression. Known as the “Three Perfections”, poetry, calligraphy, and painting were regarded as the ultimate expressions of Chinese literati culture.

During the fifteenth century, many leading gentleman artists of Suzhou spent a good part of their adult lives either serving at court in the imperial capital, Beijing, or out on provincial assignments. Often, they only returned home occasionally or after retirement. Several, such as Xia Chang (1388–1470) and Wu Kuan (1435–1504), embraced these roles, distinguishing themselves in the national jinshi (presented scholar) examinations and rising to high government offices. As artists, these men were known primarily as poets and calligraphers—except for Xia, who was also a master of the gentlemanly art of ink-bamboo painting.

The lifestyles of Liu Jue (1410–1472) and Shen Zhou (1427–1509) signaled a major alternative to serving at court. Liu only served in the capital for some eight years; Shen opted out entirely. Instead, they spent their lives in and around Suzhou, happily engaged in scholarly and artistic pursuits within their gardens and estates. Occasionally they visited friends, making communal forays into nature and to local scenic or historical sites. This lifestyle became a hallmark of Wu School gentleman artists.

Hailed as the spiritual founder of the Wu School, the painter, poet, and calligrapher Shen Zhou came from a well-connected lineage of gentleman artists who lived in the Suzhou suburb of Xiangcheng. Shen Zhou rejected the official career path followed by most of his peers in favor of a life of art and personal fulfillment. Following his example, many later Wu School artists made the same choice.

For gentleman artists in fifteenth- and sixteenth-century Suzhou, retirement consisted of socializing with other literati, refined activities such as art collecting, and a love of creature comforts such as elegant private gardens. These examples of his paintings and calligraphy reveal aspects of Shen’s life in retirement: engaging with likeminded friends, observing and commentating on everyday life, and spending time alone at home or in favorite pastimes, such as wandering the hills to find inspiration for poetry or a place to play his qin. 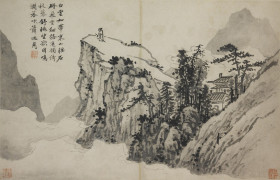 An outstanding painter and calligrapher and an important trendsetter in his time, Wen Zhengming (1470–1559) was the unrivaled leader of the Wu School for much of its heyday during the first sixty years of the sixteenth century. Born to a modestly successful scholar-official family, Wen was a late bloomer in the arts; he was particularly poor at calligraphy in his youth. But he persevered, studying painting with Shen Zhou. Eventually, Wen mastered a wide range of painting styles and developed his own powerful, influential approach to calligraphy.

In 1527, when he returned to Suzhou after an unhappy three-year stint at the imperial court, Wen built a studio on his family’s land. For the next thirty-two years, he devoted himself wholeheartedly to the life of a gentleman-scholar in retirement: reading, writing, painting, composing poetry, and socializing with likeminded friends. Wen’s pivotal importance to the Wu School is magnified by the length of his extraordinary career, his wide circle of friends and acquaintances, and the artistic renown of his many students, including his two sons and a nephew and extending to several generations of Wens.

The Wu School rose to its artistic zenith during the first half of the sixteenth century, led by three of its brightest stars: Wen Zhengming, Tang Yin (1470–1524), and Qiu Ying (ca. 1494–1552). Together with the older Shen Zhou, this group is known as the “Four Masters of the Ming.” Shen and Wen exemplified the Wu School ideal of the gentleman artist, while Tang and Qiu epitomized the accomplished Suzhou professional. Qiu was solely a painter; the other three developed distinct styles of painting, calligraphy, and poetry.

Although the Four Masters came from different social and economic backgrounds—and more than sixty-five years separated the oldest from the youngest—their lives and art intersected repeatedly. Wen and Tang had been friends since they were teenagers, and they both studied literati painting with Shen. Tang also studied under a local professional painter named Zhou Chen (ca. 1450–1535), to whom he and Wen later recommended the young painting phenomenon Qiu Ying.

Such teacher-student and patron-client relationships were key to an artist’s development and career in sixteenth-century Suzhou. Wen in particular had both a large number of outstanding students and a wide circle of local connections. Several of Wen’s students and protégés went on to develop careers and styles of their own, among them the two brilliant calligraphers Wang Chong (1494–1533) and Chen Chun (1483–1544), both of whom died before their former master.

Known for decades as the Wu School’s leader, Wen Zhengming remained active as an artist until he died at age eighty-nine. By that time, several of his most outstanding followers had already passed away. Other artists, however, continued to work in styles heavily influenced by Wen Zhengming’s approach well into the final quarter of the sixteenth century. Among these were his two talented sons, Wen Peng (1498–1573) and Wen Jia (1501–1583), who directly emulated their father and shared many of his interests and concerns. Qian Gu (1508–after 1574) also faithfully adhered to the styles that Wen Zhengming had developed and promoted.

Other gentleman artists advanced Wen Zhengming’s legacy in new directions, such as Lu Zhi (1496–1576), who developed a unique, almost luminous style of landscape painting. The flourishing professional painter Xie Shichen (1487–after 1567) incorporated elements from other popular styles, but he continued to draw inspiration and material from literati culture and to rely on gentleman artists for calligraphic contributions to his scrolls. Wen Zhengming’s influence even extended to the generation of his great-grandson Wen Zhenmeng (1574–1636), a calligrapher. He and other local gentleman artists carried on producing collective scrolls and albums inspired by traditional themes, such as the “Eight Views of Xiaoxiang,” as well as by contemporary occasions.

Still, Wen Zhengming’s death deprived the Wu School of both its center of gravity and its leading light, and the vitality and prominence of Suzhou painting and calligraphy ultimately waned. By the early seventeenth century, the city’s economic clout also had diminished, owing in part to the rise of nearby Shanghai and other towns in the Yangzi delta region. Competing centers of artistic production diluted and eventually eclipsed the city’s premier cultural status. By the 1630s, the Wu School, though still highly influential, had given up its role as a dominant force.

Based on articles from the Smithsonian Institution.